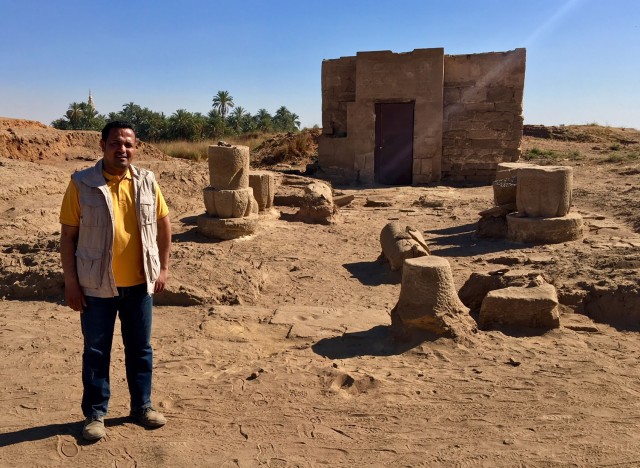 Essam is based in Cairo as Fieldwork and Engagement Manager for the Egypt Exploration Society (2013 – present). He was previously a Ministry of Antiquities Inspector and spent several years working in this capacity at the ancient temple complex at Karnak, which lies very close to his family home. Essam has undergraduate and Masters degrees in archaeology from Cairo University and is now studying for a PhD at the Ludwig Maximilians University in Munich, Germany. 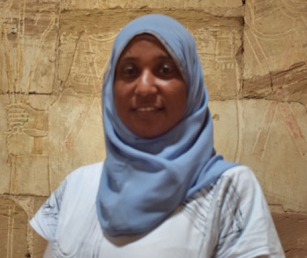 Mona is a Ministry of Antiquities inspector at the temples of Karnak and received her first archaeological training at the field school organized by the American Research Center in Egypt (ARCE) in TT 110 in 2013. Since that time she has worked in the excavations in the Ptah temple precinct with the Franco-Egyptian Centre for the Study of the Karnak Temples (CFEETK) under the supervision of Guillaume Charloux. She has also worked as an Archaeologist with the Saudi Italian and French mission to Saudi Arabia in 2017, attended site management training under the supervision of the Ancient Egypt Research Associates (AERA) in 2016-17, and was a member of the survey team on the project developing the avenue of sphinxes, also in 2016-17. Mona is preparing now her PhD proposal having finishing her Master’s degree at Mansoura University in 2017.

Hytham is a Ministry of Antiquities Inspector at Karnak Temples. In 2013 he received archaeological field training with the scientific centre at Sinai. Following this he joined the work of the Centre franco-égyptien d’étude des temples de Karnak (CFEETK) at the Ptah temple for the excavation season 2014-2015. More recently he has worked at the Mut temple to the south of Amun-Re enclosure at Karnak. He has a Bachelor’s degree in archaeology from the Faculty of Arts, South Valley University, Sohag. 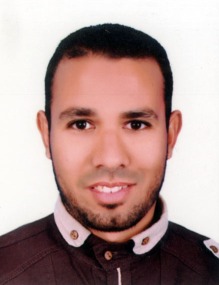 Ahmed is a Ministry of Antiquities inspector at the temples of Karnak and an Egyptian archaeologist. He received his archaeological field training (basic & advanced) during the Ptah temple excavations from the Franco-Egyptian Centre for the Study of the Karnak Temples (CFEETK) from 2014 till 2017, and participated in the Italian, French and Saudi Arabian mission at Dumat al-Jandal during the 2017 season. He also received training in heritage and site management organised by UNESCO, and as part of the Memphis site development project organised by the Ancient Egypt Research Associates (AERA). He also attended the epigraphy & research field school organised by the American Research Center in Egypt (ARCE) at TT 110 at western Thebes. Ahmed has a Bachelor’s degree in archaeology from the Faculty of Arts, Minia University. 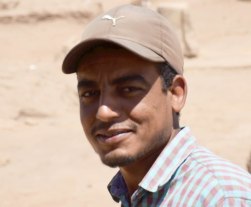 Ali Mohamed Erfan is a Ministry of Antiquities Inspector at Karnak temples. He received his first archaeological field training in 2013 at the site of Tell Basta (Zagazig), then followed this in 2016 with a training course in facsimile drawing at Karnak, a bioarchaeology course organized by the Scientific Center for Archaeological Field Training and Continuing Research (SCAFTCR) in 2017, and an RASRS archaeological field school in 2018. He also attended an object documentation course held by the Institut français d’archéologie orientale (IFAO) / Vienna University mission at the magazines of of the Montu enclosure, North Karnak. He has a Bachelor’s degree in archaeology from the Faculty of Arts, South Valley University, Sohag.

Since completing his studies in Egyptology and Archaeology at Cairo University, Ahmed Hassan has pursued a career in archaeological surveying. He has trained in GIS and remote sensing, and has experience using a range of 3D modelling and surveying software. He has worked extensively with local and foreign missions across Upper Egypt including in his hometown of Luxor. His recent work includes projects in Abydos, the Western Wadis near Luxor and the Sphinx Avenue project run by the Ministry of Antiquities.

Mohamed is a PhD candidate in ceramology and the head of the pottery studies department at the Scientific Center for Archaeological Field Training and Continuing Research (SCAFTCR) in Luxor, Egypt. He is also an inspector for the Ministry of Antiquities. Mohamed earned his Bachelor’s degree in Egyptology at South Valley University in Sohag (2000), and also holds a Master’s degree in ceramic studies from Sohag University, where he specialized in Ptolemaic pottery. Mohamed has also trained at the British Museum and with the Ancient Egypt Research Associates (AERA). He has worked as a ceramologist for numerous missions, at Giza, Saqqara, Karnak, Abydos, Taposiris Magna in Alexandria, Kom Ombo, Assiut and el-Qurna.